In the garden of thine impotence, O redeemer
Flow those flowers of evil, callous

The nectar of them, bloody wine of misanthropia

Radiantly glowing in its deception,

Inebriated by the cannabis of indulgence.

O, are we then your sheep unguided,

Left desolate to find our own, while

You shine upon thine Cross so high,

We look at thee, O savior of none

Through a glass darkly

Death, that profound philosopher, is my redemption

For in life, you were to be mine

Come, my glories shall, when you judge

For I have already judged 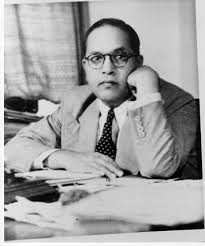 There are some who are venerated beyond measure.There are some for whom any degree of veneration is too little an acknowledgment of their brilliance and greatness.To the man who represented, and will always represent, the hope of the opressed castes of India.To Babasaheb Ambedkar.

Our sociology teacher screened a documentary called 'India Untouched' today. Based on the insidiously prevalent institutions of caste and untouchability, it explored the scenario in eight states of India. More than what the documentary contained (which was quite disturbing), it was the reaction of my classmates that truly astonished me. They flinched at the depiction of atrocities whose reports can be found in the average Indian daily on a quotidian basis.For me, it was something that I knew and had personally seen on my last trip to Mithila.
Whenever I've debated with someone on the issue of whether or not India has failed as a model of governance, I've always been told that the state has done a lot for its people. Indeed, it has produced countless doctors, engineers and professionals.They can be found in LA or Birmingham or Paris.My only response to an argument so fallacious is the state of Bihar, a classic case of rape and neglect. For a state which did so well in the time of Shri Krishna Sinha and Anugraha Narayana Sinha, the apathy shown towards it has led it to be the worst state worth living in India.The intellectual tradition of Bihar,and especially that of Mithila,can be traced a long way back.The knowledge of polity and history is second only to Bengal and Kerala.What Happened?
I believe the degradation of a state so enriched, in natural and human resources,is solely due to the stratification of society on the basis of caste and religion.The Bhagalpur riots of 1989 were an orgy of murder where brutality and inhumanity reached colossal proportions.Casteism is not rigid, like it is in South India, but it takes a form which is inhuman to the point where compassion for one's fellow being runs in the negative.The politicians have exploited this stratification and have reduced the degree of knowledge and education of the masses in a phased manner to the point where the literacy rate has fallen down to 47%.The dream is not of having a comfortable life in the home state.It is to escape. Every single educated Bihari dreams of being an engineer or an IAS.None of them wish to return to ameliorate the condition of their kith and kin.The spirit of kin, the spirit of doing something for the motherland, dies in this tussle to survive and excel.
To each Indian who draws derisive elation from Pakistan's failure as a state,look Eastward.We, the people of Bihar, the land of Patliputra, the land of Buddha, the land which has produced extensive and incomparable amounts of literature on every subject imaginable, are today reduced to an existence where our own nation is turned against us.It is commonplace to curse Bihar and Biharis for overpopulation in the major cities of India.Why do we come to alien cities to lead a life of indignity and abuse?Because we believe that if we live out a life in severely inhuman conditions,our sweat and blood may culminate into the emancipation of the generations to come.The hope never dies, never even flickers.For a state so cheated by her own people, we're remarkably optimistic, almost to the point of stupidity.But we cling to our stupid hope, hoping that the God we profess faith in will deliver us.Are we children of a lesser God, if at all he exists, to suffer thus, and that too at the hands of our own countrymen?
As a person brought up in Delhi, more Punjabi than the Punjabis,my observations can at best be described as those of a concerned outsider. Yet, for every single uninformed individual in India, for whom India is Delhi or Bombay or Bangalore,see the plight of your countrymen and then decide whether we truly are the largest democracy of the world. Whether that document of 395 Articles, 22 Parts and 12 Schedules is worth celebrating.
Blabbered by Yoda at 22:40 No comments:

Monsieur Fanon, Forgive me.
It's been a long time since I read anything substantial. I tried reading 'Waiting for Godot'(Samuel Beckett) and 'No Exit'(Jean-Paul Sartre) with very limited success.I came across certain poems of Charles Baudelaire. HBH Morrison was quite in love with them.My own favourite piece of poetry is from Book II of Paradise Lost.Playing the absolute nincompoop, I came across it while reading 'His Dark Materials'.
Here Goes:
"Into this wild abyss,
The womb of nature and perhaps her grave,
Of neither sea, nor shore, nor air, nor fire,
But all these in their pregnant causes mixed
Confusedly, and which thus must ever fight,
Unless the almighty maker them ordain
His dark materials to create more worlds,
Into this wild abyss the wary fiend
Stood on the brink of hell and looked a while,
Pondering his voyage."
Sheer brilliance. As is HDM. I still remember how I was reading the third book a day before my chemistry paper in Class XIIth. It was intricate and exciting to the point where you're rendered open-mouthed with awe.In terms of Cinema, Bunuel and Kubrick have managed to do that to me.In terms of music, hail Morrison.
Sociology paper tomorrow.We have 3 referral texts: 2 that deal with the institution of race and 1 that deals with the institution of family.The text on family, albeit lengthy and boring in parts, makes for very good reading if one is to read it detached from exam mania.Certain explorations, and certain assertions, are so simplistic that a reminder of their existence or the rationale behind them manage to
bring that flash of clarity in your mind. Frantz Fanon, in his quite verbose and abstruse text on race, has quoted Mian Jean- Paul Sartre in places. Sartre's works have never really found a good reader in me due to my sense of impatience with his form of writing.Yet,'Antisemite and the Jew' made a lot of sense and also brought forward certain inherent characteristics of humankind which are contradictory to the point of splitting the mind.Every field has its Gods and I believe human nature was best understood and explained by the absurdists and existentialists, particularly Camus(I know Ipshita shall mock me for this) and Sartre.To be fair to classmates, I am smug. I like it this way. However, I am not self-obsessed. I am obsessed with the realisation of the self. Which is why I watch 'Gunda'.
Blabbered by Yoda at 23:36 1 comment: 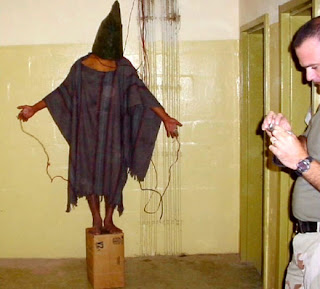 8th Amendment to the Constitution of the US: "Excessive bail shall not be required, nor excessive fines imposed, nor cruel and unusual punishments inflicted".